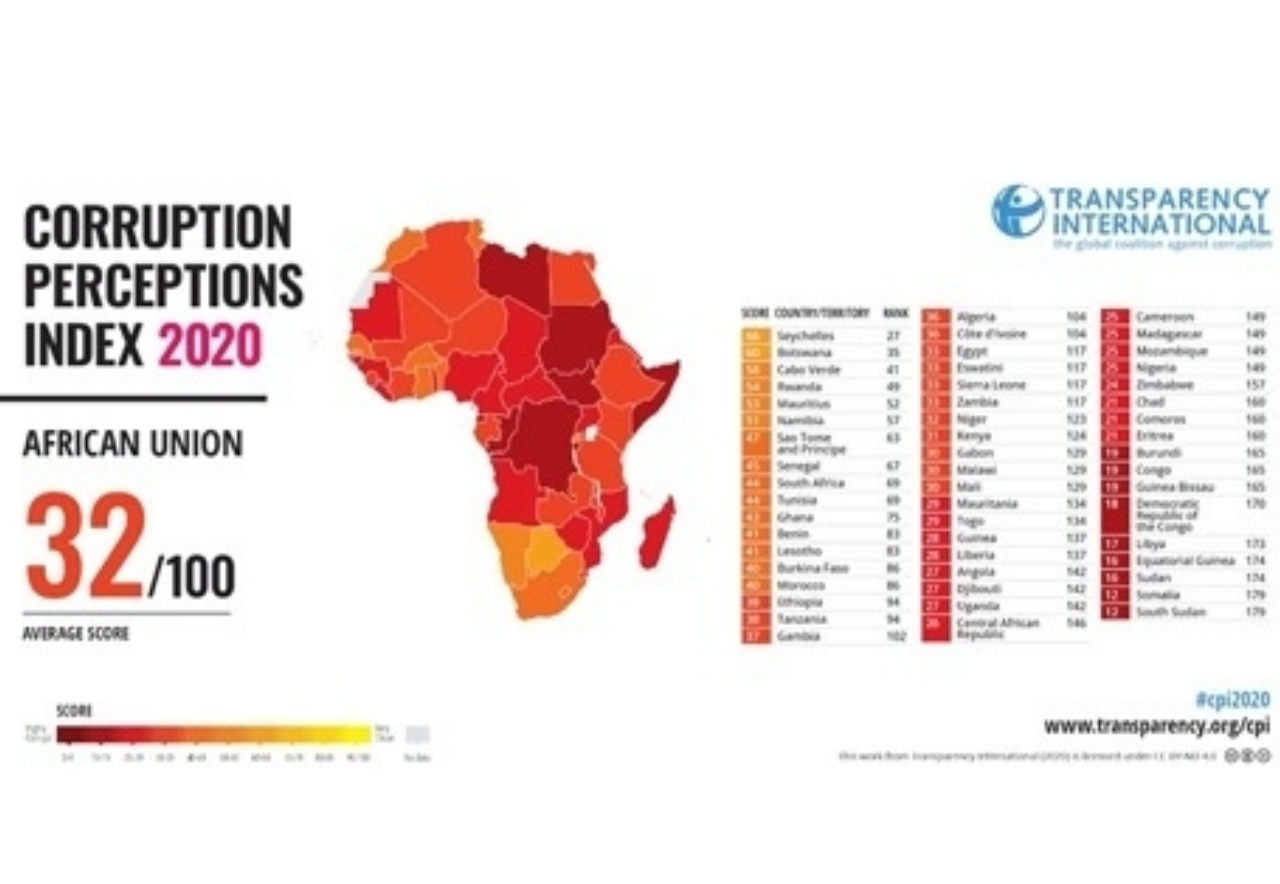 (Washington DC Jan 29, 2021) According to Transparency International’s 2020 Corruption Perception Index, Equatorial Guinea remains, with 16 points out of 100, among the 10 most corrupt countries in the world (174th out of 180 countries), a score that confirms for EG Justice and the Equatorial Guinean Commission of Jurists that the biggest pandemic affecting Equatoguineans is corruption.

In recent years the government of Equatorial Guinea has ratified the UN Convention against Corruption (UNCAC) and the African Convention to Prevent and Combat Corruption, required by the reform benchmarks included in the signed agreement with the International Monetary Fund (IMF). However, these steps have not changed how experts in good governance perceive corruption in the country.

"The laws that should sustain the legal system in Equatorial Guinea are mere semantics because they almost never apply. The government does not abide by the international and regional legal order of which it is a part, much less to its national laws" said Dr. Ponciano Mbomio Nvo, member of the Equatoguinean Commission of Jurists.

In July 2020, the government published an anti-corruption Decree-Law, with the sole objective of seeming to comply with commitments made outside Equatorial Guinea. The law fails to provide for the creation of bodies such as the National Anti-Corruption Commission, as it was the case with the Supreme Audit Institution (Tribunal de Cuentas) in 2012.  In a recent brief analyzing the law, the Equatoguinean Commission of Jurists concluded that the law does not regulate extradition processes, an important element if one takes into account the alleged cases of corruption that involve the Vice President in France, the Minister of Mines in Portugal or the former Director of GEPETROL in Spain, among others. The law also appears to exempt the President and Vice President from the obligation to file a declaration of assets as required for all public servants. Finally, some provisions aim to limit the role of civil society, a key pillar for good governance, while others threaten the notion of effective assistance of counsel by considering lawyers as civil servants in the judiciary system.

“Blatant, systematic corruption affecting all layers of the administration is the real pandemic in Equatorial Guinea. It is a way of life for the elite few, at the expense of all citizens.” Said Tutu Alicante, Executive Director of EG Justice. “The government’s mishandling of the response to the Coronavirus, where poor people are required to pay costly fees for a COVID19 test before they can board a public ferry, for example, is another example of the rampant corruption that characterizes the government.”

The 2020 global health crisis has decimated the oil-dependent economy. Inflation soared above 5% according to the government’s reporting. The slowdown in the economy implies an increase in unemployment. Nevertheless, the COVID19 pandemic quickly devolved into an opportunity for more corruption.  In one of the most glaring examples, hotels linked to political officials received government subsidies to house individuals required to quarantine, and simultaneously the hotels were charging the lodgers.

“Undoubtedly, the recent ICJ ruling in the Bien Mal-Acquis case, the alleged corruption claims in Portugal against the Minister of Mines, the corruption scandals  at the Treasury and at the national ports, the failed attempt to join the EITI, or the constant parties and parades of music stars in the country—at the invitation of government officials—despite the tattered economy, have led experts to rightly perceive the country as one of the most corrupt in the world,” Alicante added. “It is unconscionable to justify continued IMF monetary assistance to Equatorial Guinea, given the level of graft."