Two Months After Prison: An Interview with Paysa Elo Ayeto 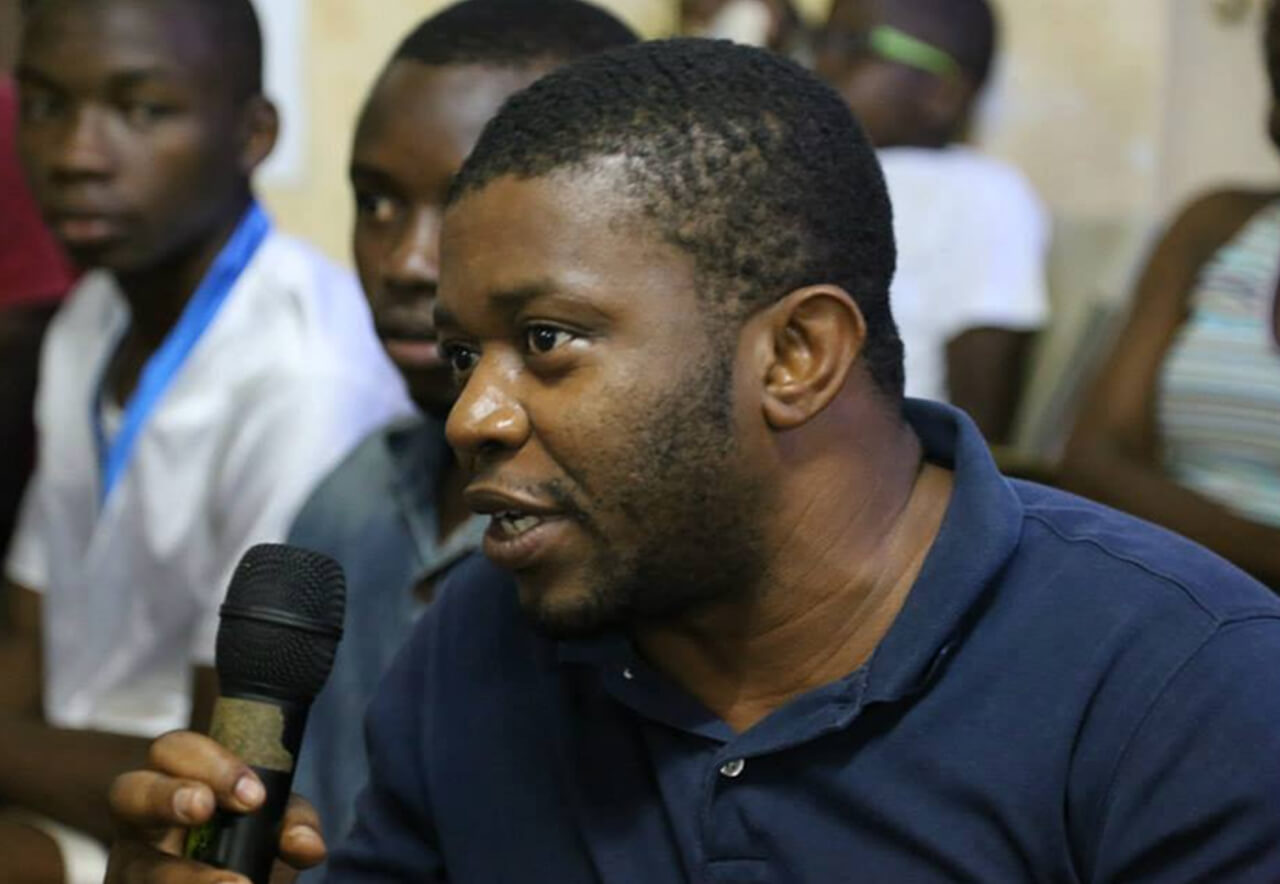 In the early morning hours of February 25, 2019, armed military men stormed into Joaquin Elo Ayeto’s (Paysa) house in Malabo, Equatorial Guinea, where without offering any explanation, forcefully arrested him. They drove him to the local Police Commissary, locally named “Guantanamo,” where he was interrogated for hours.  First they asked if he knew of a plot to assassinate the Head of State.  Then, they claimed he had insulted the Head of State. The next day, police officers interrogated him again and brutally tortured him, attempting to extract a confession about having insulted the President.  Eventually, the police transferred Paysa to Black Beach prison, where he was again tortured upon arrival.

A dynamic civil society activist, Paysa had become a target of arrests, harassment, beatings and shorter incarceration stints because of his determination and his work denouncing the corruption and human rights violations that characterize the government. This time he spent nearly 12 months in prison before he was released on February 14, 2020.

Paysa returned from his release reinvigorated and committed to picking up where he left off. Unsatisfied with the government’s inadequate response to the Coronavirus pandemic, he immediately set forces in motion with the youth activism platform SOMOS+, to compel the government to take action to protect the health of healthcare workers and to mitigate the economic loss to thousands of poor working families.  In this interview conducted by EG Justice, Paysa reflects on his year in prison, and on the pressing priorities for civil society activists as Equatorial Guinea awaits the onslaught of Covid-19.

First of all, how do you feel right now?

Enjoying the power of freedom. As García Lorca says in Untitled Plays:

Freedom is the first thing that totalitarian regimes, like mine, take away.  Regaining my freedom means recapturing the most precious asset, after that of being born. Without freedom there is nothing.  Since regaining my freedom I feel like a child with a pair of brand new shoes.

After 12 months incarcerated in Black Beach, you are finally out and already back fully into activism — largely because of the COVID-19 pandemic. Do you think you have recovered and are ready to retake the fight?

The fight, our fight for human rights, is a just and noble fight.  This injustice, my incarceration, is like extra fuel to keep going, despite the challenges.  It would be a lie if I said twelve months behind bars did not take its toll on me, however, standing up and defending life is a vital need. I feel as ready as ever.

What was the most difficult thing for you during your stay at Black Beach?

The most difficult thing for me to digest was coming to terms with the idea that it was our own brothers who inflict so much suffering on us.  Sons of the same parish, black people like us, Equatoguineans, many of them from the same tribe and ethnic group; - that has marked me for life.  Remembering the wish of our founding fathers: "to walk on the path of our immense happiness."

What image or images have stuck in your mind?

There are so many, but I want to highlight one: When you get into Black Beach, after the mandatory initiation beating, the first thing you see is a large sign that says "Holiness to Jehovah." It is very educational.  It summarizes it all.  The film Tears of the Sun comes to mind: "It is been long since God left (abandoned) Africa."

Being in there, what surprised you, what things you did not imagine before that unjust confinement?

How cruel human beings, man, can be.  In Black Beach life is worth nothing. Throughout my time there, I saw nine boys die, abandoned, after an epidemic of diarrhea. One of them died near the door of my cell.  Shocking, while the lifeless body lay there on the ground, we —the rest of the inmates—went on about our day, as if nothing had happened.  We had become desensitized to that reality; there was no time to feel.  The corpse was there for about three hours until they came to pick him up, we couldn't even cover him.  In short, it is a horrifying experience.  Two weeks after that, no one, no government or judicial authority came to ask what was happening there. The jail administrator instead repeated over and over again: "He who dies will be taken out."

Did you get to know of cases of people in preventive detention, people without a court appearance, without conviction, or even without a formal charge?

In the last official count, on December 20, 2019, we were around 800 prisoners between both men and women.  Of those, approximately 300 had been formally convicted. The rest of the prisoners were in a situation similar to what you describe.

More than 30% have had no trials, not even provided testimony in court.  Many are there for simple misdemeanors: petty-thefts, fights, possession of small quantities of marihuana, etc.  They leave the police station to go to court where they are usually asked for 200 thousand CFAs.  If they do not pay, they can forget being released.  Often their family members do not even know they have been arrested, let alone that they are being transferred to prison.  Crime and the arrest of petty criminals is a lucrative business between the police, the magistrate judges and the prison administration.  They hold hundreds of young people until their families pay fines and if they don’t pay, the inmates are left there indefinitely, under the pretenses of juvenile delinquency.

I know of many cases of prisoners who have been there for 2, 3 to 4 years without appearing in front of a judge. The courts have no control of entry into prisons.  New cases are filed every day, and these accumulate due to lack of processing.  If a new inmate does not have a lawyer or, their families does not pay for their release, they are automatically forgotten by the system.  To give you an example, a young man who went by the nickname Muan ELA, has been in Blarck-Beach for two years.  A policeman from the Judicial Brigade received a call from an uncle saying his goat was stolen and that he suspected a neighborhood boy.  The policeman went and arrested Muan Ela, and took him straight to Black Beach.  Another young man named Bobin, has spent 4 years in prison without a hearing.  A house in which he lived burned down. The house was owned by Antonio Oburu, the CEO of GE Petrol. One of Mr. Oburu's brothers took Bobin to the police station, and from there he was taken directly to prison.  We are talking about 4 years of this young kid’s life lost in prison, as a personal prisoner of Antonio Oburu; without official charges and without any trial.

What were the conditions for the prisoners, the physical space, the food, the beds?

The current Black Beach prison was rehabilitated to receive the foreigners involved in the coup plot of Simon Mann.  The work was carried out by Bomden Services, a construction company owned by Julian ONDO NKUMU, the then Deputy Minister of Security.  There are two sections, Baghdad where the women are hosted and Djibolo for the men.  It is called Djibolo as a tribute to the Djibolo ship, of which people claim it “never leaves anyone ashore.”  Djibolo was built to house 200 prisoners.  You can tell there used to be water installations and video surveillance cameras, but the lack of maintenance and overcrowding have made Black Beach hell on earth.

There are two public toilets with 16 taps, but only 4 work; two per bathroom for almost 750 people.  As you can imagine, this creates constant confrontations between prisoners trying to get access to the taps. There are no evacuation doors, except for the front entrance door, which is guarded at all times.

On the upper floor, where I was, the toilets are inside the cells to be shared by inmates occupying that cell.  Toilets lack running water, so each inmate gets between 5 and 10 liters of water per day.  The food is terrible.  It is the cause of constant epidemics of diarrhea.  Many dogs eat better than the prisoners.

Only some older and more veteran convicts have bunk beds.  For the rest, there are no beds, no mattresses; just any cardboard one is able to collect.  People sleep like animals, hence the constant illnesses.  There is a metallic mesh that should have served as a separation between the two floors.  Instead, hundreds of prisoners fight to have a place to sleep on the metal mesh, at the risk of the wires giving in, and everyone falling and crushing the prisoners below. This is a veritable ticking time bomb.

What should the government be worried about concerning prisoners in Black Beach, or in any jail in the country, considering the risk posed by Covid-19?

The government of Equatorial Guinea doesn’t care about anything, much less the wellbeing of prisoners.  There is a saying in Black Beach: prisoners have no rights. In times like these, that saying gains new meaning.

If Covid19 appears in Black Beach the effect would be tantamount to a crime against humanity.  Our society as a whole should prioritize human rights, the right to life. The current reality demands this from us.  We ought to be demanding the release, the provisional release of prisoners.   Alternatively, we must keep denouncing the dire situation of prisoners in Equatorial Guinea.

What’s your message for the diplomats, given the risk to which hundreds of unjustly imprisoned Guineans are exposed?

The message is clear and simple: human rights have no borders. The governments they represent are committed protecting human rights. Thus, I ask them to extend that same commitment and defend human rights in Equatorial Guinea.

What are the objectives of SOMOS +, in the medium and long term?

SOMOS + wants to be useful for Equatoguinean society.  In the short term, we need to make ourselves known and accessible to people. In the long term, we want to consolidate ourselves as a civil society platform in favor of human rights and reform.

What will the platform be focusing on in the coming months?

We would like to focus on humanitarian issues. There is much to be done to ensure that people in this country have basic needs covered.  We want to help provide answers to these needs, especially for the most vulnerable sectors such as: children, single women with children and the elderly.

If a young Equatoguinean wants to become a member of Somos +, how can they associate, what can they do, how do they contact the platform?

Anyone interested in the defense of human rights, the right to life, human dignity, has the doors of this platform open.  To join the platform, the fastest way is to contact me or any of the other coordinators.